Today both we and the ”California woman” biked to John Day. After a food stop on a church staircase we lost her and never saw her again. We stopped at the Sunset Inn in John Day and watched NCSI Sunday. To be continued episodes all evening.

Not a good day. Heavy heads.

We aimed for Prairie City, it was cold, windy and miserable conditions. Got passed by a camper van with bikes on the back. Just noted it superficially, but it would play a big role later.

We arrived and checked the towns only hotel. No vacancy. Curtain down. Hopelessness gripped us for about 30 seconds.

Then a woman came up to us and said, "You can sleep in our camper van, we will stay at the hotel".

She was the one who had passed us in the camper before.

Her name is Cathy, and her husband Phil and their friend Melissa are also out cycling c2c.

We must have looked like question marks, completely taken off guard, until we got something out of our mouths, that yes, we would love to do that :-)

We had coffee in a cozy cafe with home baked goods and then we ate Mexican food in a cold restaurant. Not nice after a cold ride. Veronika then went to rest in the RV.

Such nice and generous people. They offered snacks and pleasant conversation in the hotel lounge. They also taught me two new card games and a day in misery turned out good in the end.

Today Phil and Melissa were going to bike to Baker City. I hung on, especially as Cathy took all my bags, as well as Veronika with her in the car.

She also told Veronika to cancel our hotel in Baker City and stay with them at an air b'n'b instead.

Three tough climbs were on the schedule, them on roadbikes and I on a gravel, so I pushed ahead because I thought they would catch up in time for the first peak. But look, they didn't.

Stopped and relieved pressure and put on extra clothes for downhill cycling. Then it starts snowing, and Cathy and Veronika whizzed by when I was a little way off the road.

Lifeline used up. Just hurtling downhill and I was lucky to escape the worst of it.

Phil and Melissa, on the other hand, had a rain/snow storm to battle downhill.

After that, the weather was mostly good for the rest.

On the second peak I caught up with the NZ/German couple from the church in Dayville.

What a coincidence. We talked for a while they once again put on full rain gear as it was a bit gray at the time. Then I rode on.

Arrives in Baker City, buys coke and snickers at a gas station, rolls into town and meets the escort car and waits for the others.

Then we ate Mexican.

A pleasant evening with a bonfire, many many pleasant stories told, and pizza, which set off the fire alarm in the house before bedtime.

Phil started the day by making American pancakes with blue corn for breakfast. Then he and Melissa rolled off north while we sadly said our goodbyes and rolled south towards Ontario (Oregon). Headwind which then changed to uphill when we turned off.

At 1811 m above sea level we finally reached the real summit and thereafter a wonderful descent.

But where would we sleep? Which road would we take towards Ontario?

We asked a woman in a house and choose, according to her, the best route over the shortest.

However, the sleeping problem remained unsolved.

A guy on a horse might know a good place?

Yes, his family owned all the land around so he called his dad and we had a tent site for the night. Perfect. A bit windy and cold but still. Free is good.

A day that started strong but then it cracked a bit after we ate lunch. We sat down by the side of the road and collectively broke down. Then a truck swerved to the edge of the road and asked if it was ok. Obvious answer: No.

Josh and Nikki were the ones who drove past us, then turned around to check the situation.

They took our bikes and us to Vale in their truck.

"You shouldn't have to set up the tent, we have a guestroom, you can sleep there".

Said and done. A pleasant evening with wonderful barbecue and talk about this and that.

They were "arms advocates" and showed part of their arsenal and also a "secret room" where they kept these. Most collectible weapon. But everyone was loaded…..

It's a necessity these days was their argument.

Josh started the day by making a hearty breakfast while we watched the Big Bang Theory and drank coffee on the sofa.

Then we sorted ourselves and equipment and cycled off towards Ontario. We ate and shopped there before crossing the border into a new state. Idaho here we come.

We landed at Kiwanis Park in New Plymouth. Everything was super. Except that the public restrooms were not so public but LOCKED!! What were they thinking?!?

A super day on the bikes, despite a puncture just outside a drag racing competition.

We ended up in Emmett and in the middle of the 87th Cherry festival which we walked through to get to…McDonalds. First visit there on the trip.

Then came a hefty hill. We paused at a memorial for fallen Americans in wars and 9-11.

We sped into Eagle where we were blessed as we paused outside the Christian church.

Rode on a cycle path called Greenbelt and looked for a tent site. We ended up in a hotel in downtown Boise as the campground on the outskirts was occupied. 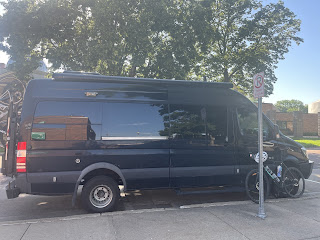